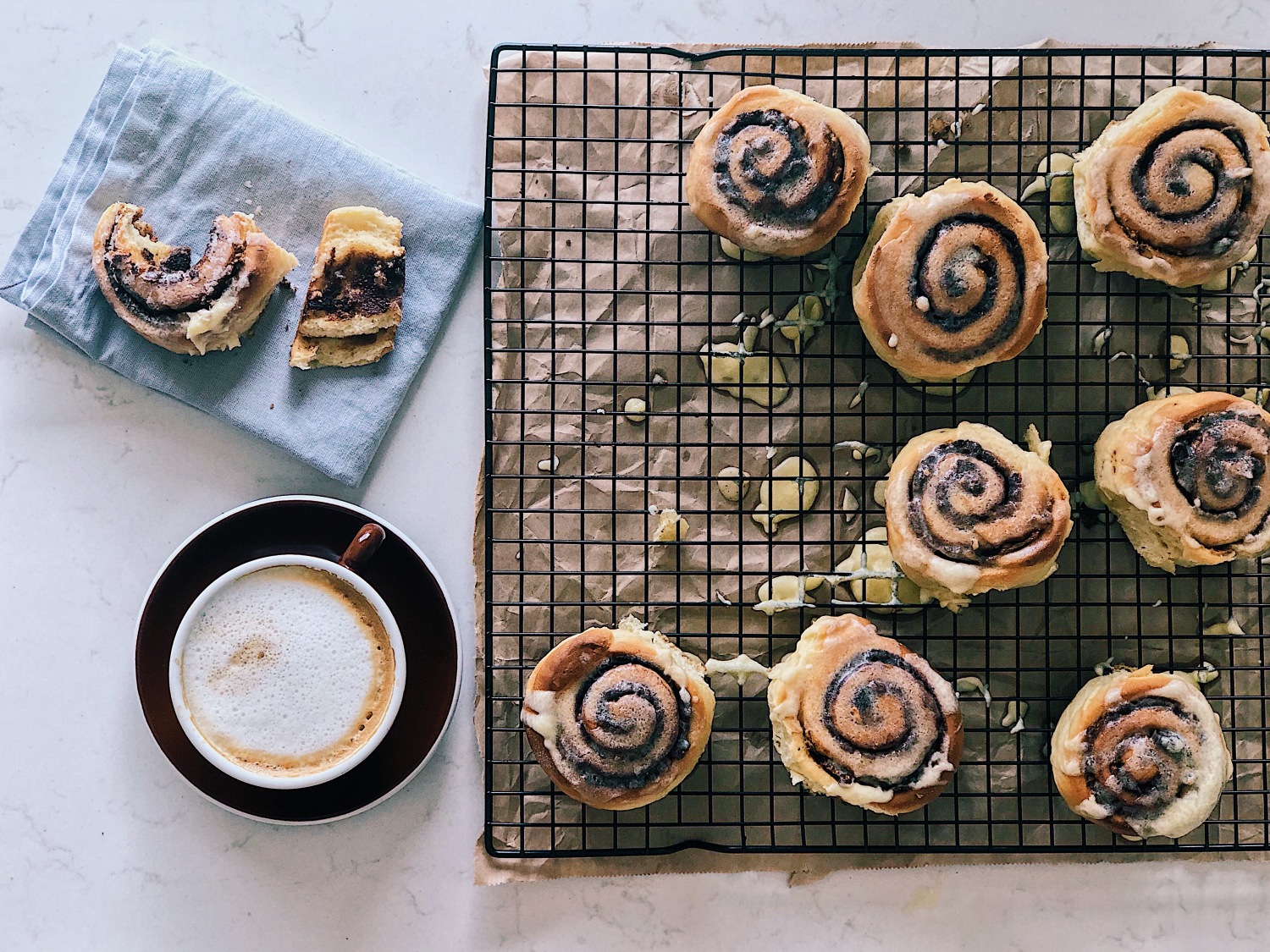 Any fruit toast fans out there? I really love it, but only in A, an airport lounge, or B, at a hotel buffet. For some reason, those thick slices that have done 2 circuits in the conveyor belt toaster, followed by a slathering of butter just taste so good. I don’t bother buying a loaf to have it home because the kids don’t like it, but I recently discovered the fruit toast peanut butter from Fix & Fogg. It’s peanut butter Jim, but not as we know it. Sultanas, raisins, cinnamon and freeze dried apple are added to the peanut butter to make a spread that tastes exactly like fruit toast!

I’d been wanting to make cinnamon buns for a while now and knew that fruit toast PB would take them to the next level. They’re really very good. The dough is quite rich buttery, and the filling is decadent thanks to dark muscovado sugar and that PB. Although it looks like a very detailed recipe, these buns are actually really easy to make. There’s a lot of waiting around and it’s best to start these a day in advance. Served with a cup of good coffee, they’re an excellent way to start the day.

Place the water, milk and a pinch of the sugar in a small saucepan and gently warm it over a low heat until a thermometer registers about 40°C (you don’t want it too hot otherwise it will kill the yeast.)
Remove from the heat and sprinkle over the yeast. Leave it for about 5 minutes, until the mixture is foamy.

Whisk the melted butter, egg yolk and vanilla into the yeast mixture. Set aside.
In a large bowl, whisk together the flour, remaining sugar and salt. Make a well in the centre and add the yeast mixture. Stir with a wooden spoon to make a thick and slightly sticky dough.
Turn it out onto a floured bench and knead until it becomes soft and elastic, about 5 minutes. Shape into a ball. (You may need to add more flour.)
Grease a large bowl with melted or softened butter, add the dough and gently turn it to coat. This will stop it sticking to the bowl.
Cover with plastic wrap and let it rise at room temperature until it has doubled in size, about 60-90 minutes.
Tip the dough out of the bowl and knead to release the excess air. Re-form into a ball and pop it back into the bowl. Grease a piece of plastic wrap and lay it directly on the dough, then cover the bowl tightly with more plastic wrap and refrigerate for at least 4 hours, or overnight.

Here’s a series of photos showing the progress: 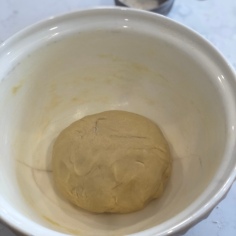 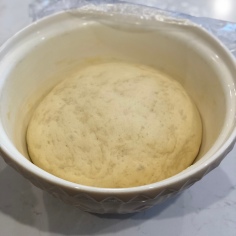 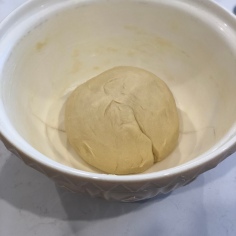 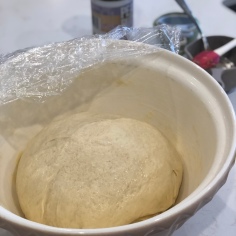 Mix the butter and peanut butter together in a small bowl until well combined. Warm it in the microwave if you need to soften it. Set aside.
Whisk the sugar and cinnamon together in another small bowl and set that aside too.
Grease a 9×13″ baking tin with butter or oil. I lined the bottom of mine.
On a floured bench top, roll out the dough into a 10×18″ rectangle.
Spread the peanut butter mixture all over, leaving a 1″ border along one of the long sides.
Sprinkle with the cinnamon sugar, then brush the clean border with water.

Tightly roll the dough into a log, working towards the clean border. Pinch the seam together to seal.
Take a piece of thread and slip it under the dough log, about 1.5″ from the end. Cross over the roll and pull tightly to cut off a piece. Repeat until you reach the end. (See notes.) (Also, it’s the most genius way of slicing it up.)
Place the buns in the prepared tin and cover loosely with plastic wrap. Leave them to rise in a warm place until doubled in size, about 1 hour. 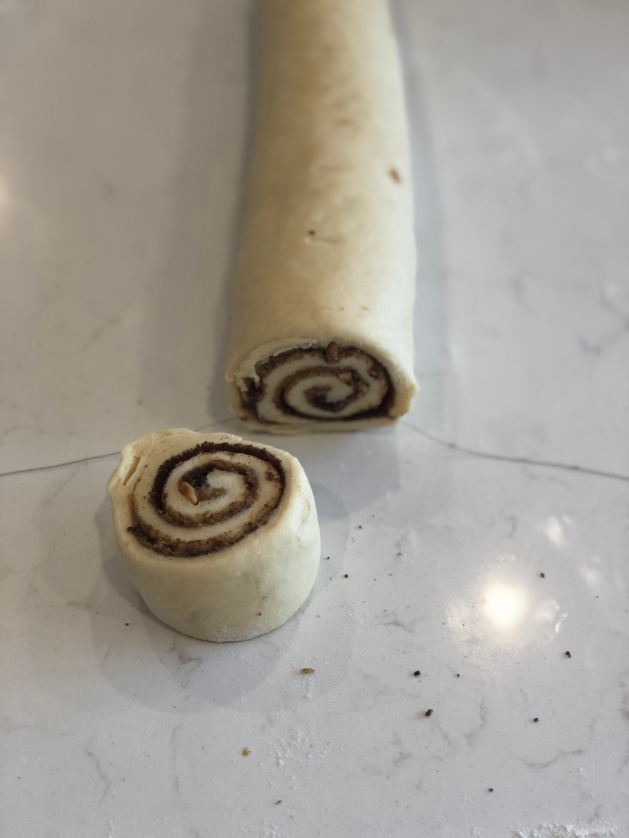 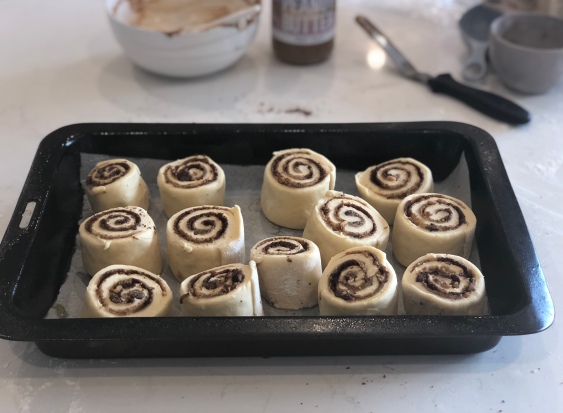 Preheat the oven to 180°C. Uncover the buns and bake for 25-30 minutes, or until they spring back when poked.
Remove from the oven and cool in the tin for 10 minutes before glazing.

Start with 3 tablespoons of milk and whisk everything together until smooth. Only add the extra milk if your glaze isn’t runny enough. Drizzle over the warm buns.

These buns are best served warm so if you’re eating them the next day, heat them in the microwave first.

© Once Upon An Egg. All images and content are copyright protected. Please don’t use my images without permission. If you want to republish this recipe, please re-write it in your own words, or link back to this post for the recipe.