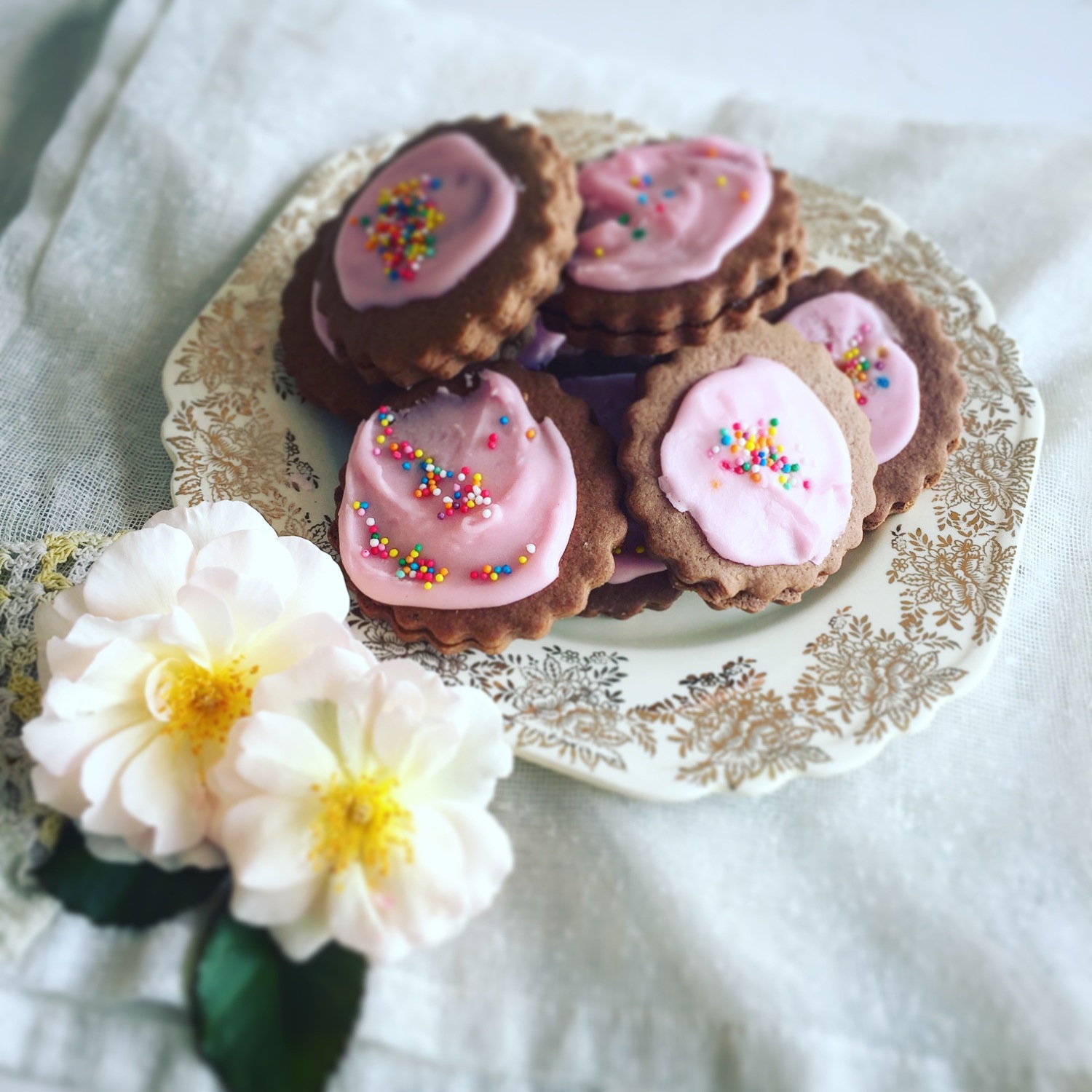 I grew up living in a different city from both sets of grandparents but I was always lucky enough to visit them a lot. My Nana Betty lived in Darfield, Canterbury. She’d lived in the area her whole life, marrying my granddad and raising my dad and his brother. She was (and still is) an amazing baker, and it’s thanks to her I have my love of baking. Nana Betty is old school, she’s not about salted caramel macarons or Nutella buttercream. When you opened her tins you’d find afghans, cheese straws, Neenish tarts and Belgian biscuits.

Belgian biscuits are one of my favourites. A slightly spicy shortbread type biscuit, they’re traditionally sandwiched with raspberry jam and garnished with a glacé cherry on top. Nana always iced hers with pink icing and a sprinkling of 100’s and 1000’s, or sometimes raspberry jelly crystals. I remember biscuits in the shape of the moon, stars and flowers.

Nana lives in a rest home now and it’s one of my greatest joys to send her a tin of something she’s taught me to bake.

Method
Preheat your oven to 180°C and prepare a couple of baking trays with a sheet of baking paper.
Sift the flour, baking soda, cornflour, cinnamon and cocoa into a bowl. Set aside.
Cream the butter and sugar until pale and fluffy, scraping down the side of the bowl a couple of times.
Add the golden syrup and eggs and mix well.
Turn your mixer to low and slowly add the dry ingredients. The mixture will gradually form a dough. Separate the dough into 3, just eyeball it, you don’t need to be too fussy.
Tip one ball of dough out onto a lightly floured bench and give it a quick knead until it’s malleable. Leave the other 2 balls of dough in the bowl and pop it in the fridge. Roll the mixture until it’s quite thin, about 3mm. I like to flour my rolling pin to stop the dough sticking. Cut the dough into shapes and set them out on the oven trays. You can put them quite close together, they’re only going to spread the teeniest amount.

Pop the trays in the oven and bake for 15 minutes, rotating the trays halfway through. They should be quite firm on top when they’re done.
Use the rest of the dough the same way, chilling the scraps before re-rolling.

To finish
Sort the biscuits into pairs, some may have spread a bit more than others so match them up. Ice with a simple icing:
2 cups icing sugar
2 teaspoons butter, melted (you don’t need to be too accurate here, butter is good!)
Splash of vanilla extract
Boiling water
Red food colouring
Decorations – sprinkles, jelly crystals or halved glacé cherries

Mix everything together until smooth, adding little splashes of water as necessary. I like to use a butter knife for this. If your icing is too runny, just add a little bit more icing sugar. Colour it pale pink and ice half the biscuits, topping them with sprinkles, jelly crystals or glacé cherries.
Leave them to set a bit, about 10 minutes, then jam the pairs together, gently twisting them so the jam squishes out to the edges. Store in an airtight tin.

© Once Upon An Egg. All images and content are copyright protected. Please don’t use my images without permission. If you want to republish this recipe, please re-write it in your own words, or link back to this post for the recipe.